You can attract or repel any creature of your choice with 5e Antipathy Sympathy 5e spell. You focus on your target which is within the range of the spell, it can be a big or small object or creature but the area should not be larger than a 200-foot cube. Now mention a species of intelligent creatures, such as red dragons, goblins, or vampires. On doing this, you give the target an aura which either attracts or repels the specific creatures you chose for the duration. Choose antipathy for repulsion and sympathy for attraction as the aura’s effect.

Antipathy: This Enchantment makes creatures of a certain kind get an intense and urgent feeling to leave the area to avoid the target with the aura. When the creature, is within 60 feet of the target with the aura or has vision of it, he must succeed on a wisdom saving throw or get frightened. They will remain frightened as long as they see the target, or stay in the range of 60 feet from it. While the creature is frightened, it must use its movements to move to a safe spot where it can’t be seen from the target or is moves out of the 60 feet range required for the spell to work. If the creature fulfills either of these, it will no longer be brightened, but will become frightened again if it regains sight of the target or moves within 60 feet of it.

Sympathy: This enchantment makes the specific type of creatures have an intense and urgent feeling to approach and move nearer to the target while it can see it or is within 60 feet of it. When the creature is within 60 feet of it or the target is in its vision, it must succeed in a wisdom saving throw or use its movement on each of its turns to enter the area or to move inside the range of the target. The creature can’t itself move away from the target but if the target damages or harms a creature affected by the spell, it can make a wisdom saving throw to end the effect.

Ending the Effect: If an affected creature ends its turn while not within 60 feet of the target or able to see it, the creature makes a Wisdom saving throw. ON a successful save, the creature is no longer affected by the target and recognizes the feeling of repugnance or attraction as magical. In addition, a creature affected by the Spells is allowed another Wisdom saving throw every 24 hours while the spell persists.

Any creature that saves or frees itself from D&D Antipathy Sympathy spell, is immune to it for 1 minute, but after that amount of time, it will again be possible for it to be hit by the spell. 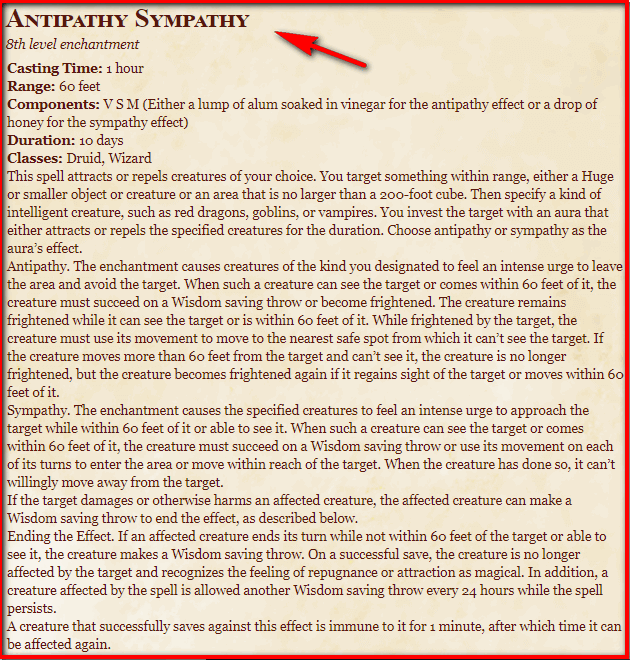