A seismic disturbance is created by you at a point on the ground that you can see within range. During that period, a strong tremor rips through the ground in a hundred foot radius circle on that point. And, it shakes all the shapes and creatures in who are in contact with that ground area.

The ground becomes difficult terrain in the area. Every concentrating creature on the ground must make a Constitution saving throw. on a failed save the concentration of the creature is broken.

When you cast the spell and you focus on it at the end of each turn, then each creature on the ground in that area must make a Dexterity saving throw. If the save is failed, the creature is knocked prone.

Depending on the terrain in the area, this spell can have additional effects, as determined by the GM.

Fissures – Fissures open during the spell’s region at the start of your subsequent turn when you cast the spell. A total of 1d6 such fissures open in places selected by the GM. Each is 1d10 × 10 ft deep, 10 ft extensive, and extends from one edge of the spell’s region to the opposite side. A creature standing on a spot where a fissure opens have to be successful on a Dexterity saving throw or fall in. A creature that efficiently saves moves with the fissure’s edge because it opens. A fissure that opens under structure reasons it to automatically collapse.

Structures – The earthquake 5e deals 50 bludgeoning destruction to any structure that is in contact with the earth in the area when you cast the spell and at the start of each of your turns until the spell ends. In the event a structure drops to 0 hit points, it collapses and potentially damages nearby creatures. A creature that is within half the distance of the height of a structure must make a Dexterity saving throw. The creature takes 5d6 bludgeoning damage on a failed save. DC can be adjusted higher or lower by the GM, depending on the rubble’s nature. If the save is successful, the creature takes half as much damage as well as does not fall prone or become buried. 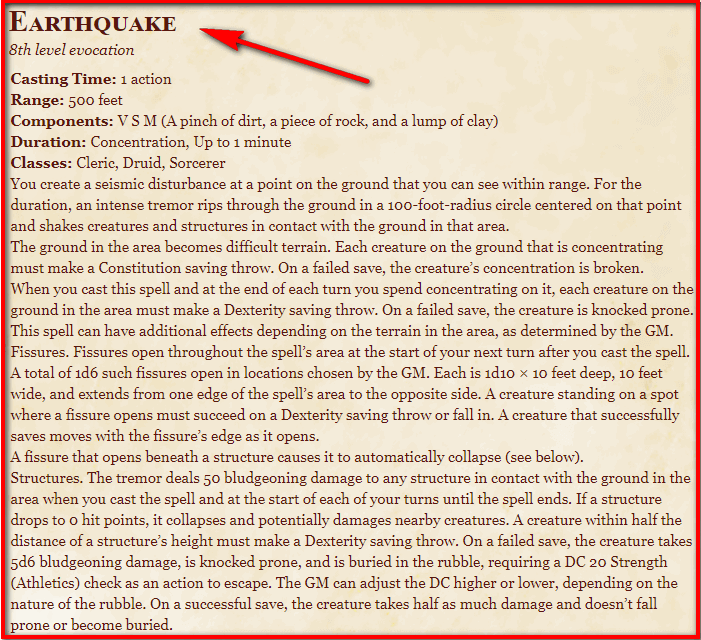