In this spell, you have to conjure a phantom watchdog in an unoccupied space where you can see within range and where it will remain for the duration up to you would dismiss it as an action or it has another chance that you would move 100 feet more than away from it.

Instead of you, the hound would be invisible to all other creatures and it can’t do any harm to you. The hound will start barking with very loud sound this would happen when a small or larger creature approach within the 30ft of it and it wasn’t speaking the password which you fixed to that then you don’t cast Faithful Hound 5e spell but if you cast this spell then it would behave like above said.

The hound can see all the invisible creatures and also see into the ethereal plane and finally, it ignores allusions. Each and every of your starting turns the hound will attempt on the creature to bite it but that creature must be within the 5 feet of it and hostile to you.

From the hound’s attack, you would get a bonus and it is equal to your spellcasting ability modifier+your proficiency bonus. But for every hit, it will deal 4d8 piercing damage. 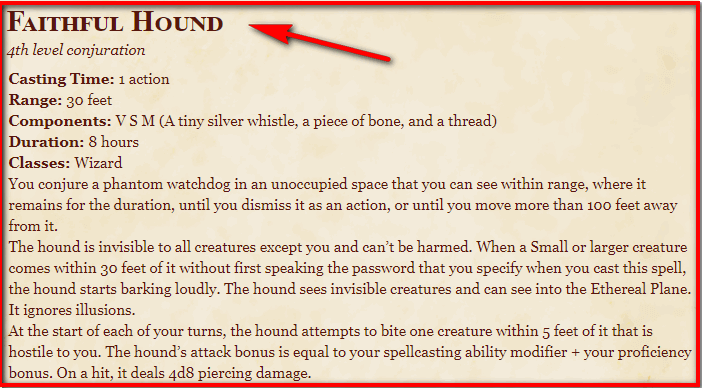