Here you have to step into either a stone object or surface large enough for fully containing your body, melding yourself and all the equipment which you carry with the stone for the particular duration. By using your movement you can step into the stone at a point where you can touch.  Detectable by non magical senses nothing of your presence will remain visible.

Whenever you merged with the stone, you can not see what will occur outside of it. Any wisdom or perception can check you make to hear its out side sounds which are made with disadvantage. You can remain aware of the passage of the time and it can cast spells on yourself while it was merged in the stone. You can also use your movement to leave that stone where ever you entered it which will end the Meld into Stone 5e spell. Otherwise you can not move.

If the stone would get minor physical damage then it doesn’t harm to you. But its destruction whether it might be partial or partly or any change in its shape that means to the extent that you do not fit with it  longer and its shape will expel you and it will deal 6d6 bludgeoning damage to you. When the stone’s complete destruction or transmutation into the different substance will expel you and it will deal 50 bludgeoning damage to you. If it expelled then you will fall prone in an unoccupied space which is closest wherever that you have entered first. 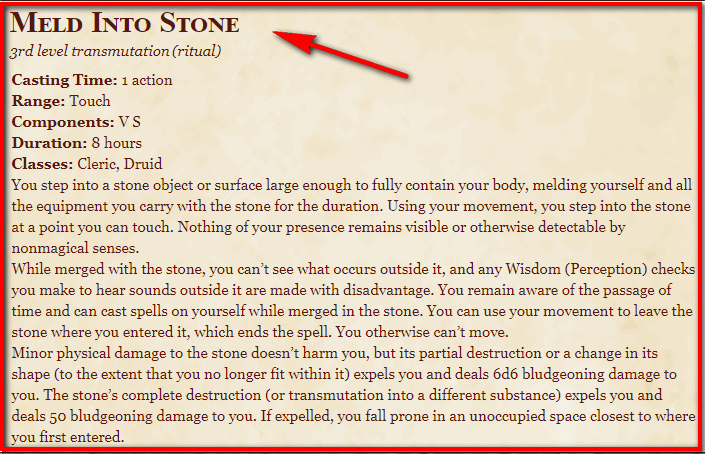