This spell instantly takes you and upto 8 consenting creatures to a place of your choice within the range of what you can see. If you want take an object, it should be able to fit inside the 10 foot cube and should be held by a creature willing to do it. Other conditions to travel to the destination includes knowing the place and existing in the same plane of existence as you. The success of reaching the place also depends on how well you know the place. The Dungeon Master rolls d100 and decides the success of the teleportation based on this table.

“Permanent Circle” is a permanent teleportation circle whose sigil sequence you know.

“Associated Object” is when you have an object in your possession that belongs to the place where your destination is within the last six months like a book from a library that belongs to a wizard, or bedsheet linen from a royal suite, or a chunk of marble from a Lich’s secret Tomb.

“Very familiar” is when you have visited this place often, or a place you can see when you cast the spell.

“Studied carefully” is when you have enough information about the place but haven’t visited it too often and it’s out of vision.

“Seen casually” is when you you have visited the place a few times but aren’t very familiar.

“Viewed once” is you have seen once but not visited, probably by using magic.

“Description” is when you have information about the place like it’s location and appearance through someone else’s description, like a map.

“False Description” is a place that doesn’t exist. You might have viewed an illusion or are trying to teleport to a familiar place that no longer exists.

You and your group teleport 5e to the destination where all of  you want to arrive at.

You and your group don’t arrive at the exact location where your destination was marked but rather at a random distance away from in a random direction. This distance is calculated by taking a 1d10 x 1d10 percent distance displacement from the original place that was to be travelled. For example if you tried to travel 120 miles, and reached off-target, then rolled 5 and a 3 on the two d10s, then you would be off target by 15 percent, or 18 miles. The Dungeon master than decides the direction by randomly rolling a d8 and then marking the directions like 1 as north, 2 as north-east, 3 as east, and so on. Suppose you were teleporting to a city located near the sea, and are placed 18 miles out in the sea, it could be very troublesome for you and your group.

You and your group are teleported to an area which looks identical visually and thematically to the place you originally desired to teleport to. It often places you to the nearest similar place but since this spell has no range, it could place you anywhere which is similar.

The teleportation doesn’t go well and each creature teleporting with you takes 3d10 damage and the Dungeon Master rerolls to see where you end up teleporting. Also multiple mishaps can occur, each dealing damage separately. 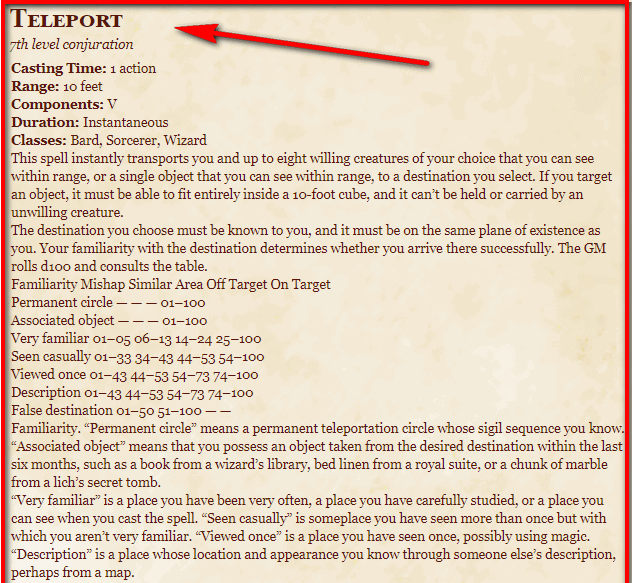