On a solid surface and within a range you have to create a wall of ice. You can form that wall into a hemispherical dome or you can form the sphere which has a radius up to 10 feet or the shape of the plane can be made up of a 10-foot square panel. Each panel with another panel must be contiguous. The wall must be 1 foot thick and it will last for the duration.

The creature which has within its area must make a Dexterity saving throw and it is pushed to one side of the wall, this will happen if the wall would cut through the space of the creature. The creature will get some damages such as on a failed save the creature will take 10d6 cold damage and half as much damage on successful save.

The wall can be damaged and thus breached because the wall is an object. The wall has AC12 and 30 hit points per each 10-foot section. It is very harmful to fire damage. It will become destroyed when it reduced to 10-foot section of wall to zero hit points. Space will leave which has occupied by the wall would leave the behind of the frigid air.  For the first time, The creature which is moving through the sheet of frigid air on a turn it must make a Constitution saving throw. On a failed save and successful one the creature will get the damages like 5d6 cold damage and half as much damage respectively.

By using Wall of Ice 5e spell slot of 7th level or higher you can cast this spell. The damage when the wall deals with it will appear as increases by 2d6 and the damage which is from passing through the sheet of frigid air will increase by 1d6. For each and every slot above the 6th level. 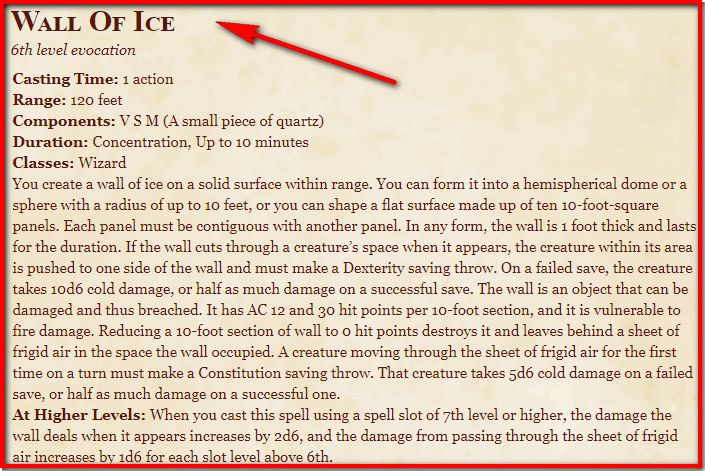