In dungeons and dragons role playing game the Dungeon Master (DM) will keep on let you know that you have been leveled up, but the truth is you never have really done it before. You are not digitally active to track about your character which could help to leveling up for you..but you’re simply using the pencil and paper. However you would like to make sure that you do not miss any type of objects in dnd levels.

This game is the biggest game and it could be daunting for figuring out where ever you have to go and also about what you need to do for leveling up. This dnd 5th edition has been done this procedure easier that its predecessors, al though it can be more for all the newcomers for such role playing games. Let us discuss in more detail.

How To Level Up With Your Class

Before we are going to provide you the checklist of goodies, the first look of your class in a player’s handbook for finding the level up table. This do note many of both the common and also the unique benefits that you get. You can also checkout the image mentioned below. 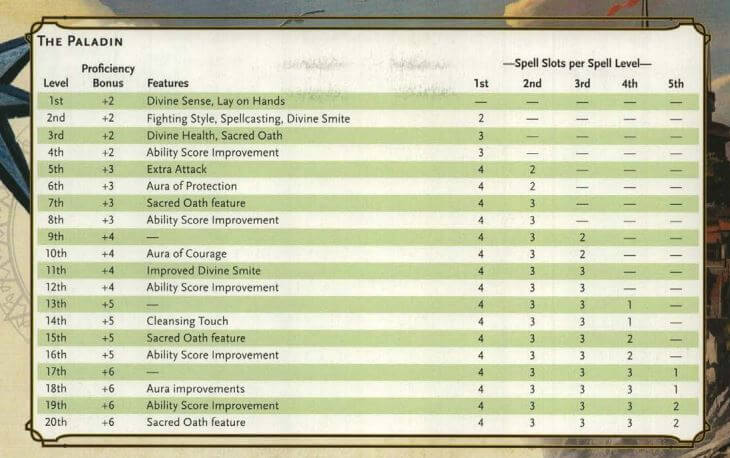 Some of the things are more relevant for all of the characters to check out when it is leveling up. Such as:

All of your hit points are increases by your class’s Hit Die + your Constitution modifier. as per this feature you can easily find what type of hit dice is your class regularly uses just below to its level up table in Player’s Handbook. Here we take a paladin class, for instance, uses d10s for all of their Hit Dice; like the character would be roll a d10, and also add to Constitution bonus, and after that it add this result to their existing maximum number of their hit points for being able to setting up a brand new hit point to the maximum.

Is Proficiency Bonus? everything to build up your level, here is the explanation…! Each and every character, no matter about what class and also get the similar proficiency bonus which has been based upon the total level. Usually, this is meant to be ensure to everyone that would be scale up in a power fairly. Of course you will capable of finding the proficiency bonus column which has been noted on every class table, but mainly they are in the all similar fact. Whenever you level up of your proficiency bonus, then check to see if this value would be increased. But whenever if it does so, then it’s time to boost all of your bonus for all of your proficient skills and also for the attack rolls, But whenever you’re a spellcaster , then your spell save DC can also gets the boost now.

This level up table for your class would also have the column of the features. But some of these would generic, abilities which are gained by the every character in that particular class. But here for an instance, each and every kind of paladin would be get “Lay on Hands”, but no matter which has been Sacred Oath they have been selected. You can check out the table to see if there is the feature listed, after that look for all of its details after in the class description. So there are two different types of special features which are mixed in to this particular list, which we will describe them next.

It is one of the special types of features is the subclass features. You can easily select your subclass somewhere in your first three levels of your class and even it gives you the unique associated features as you could level up it later. The Subclasses are mainly called in various things per a class (“Sacred Oath” for a Paladin, “Primal Path” for a Barbarian, “Druid Circle” for a Druid, etc) even though they all are work in a same way. So then your level up table would be indicated when you’ve got the subclass feature with the help of its generic term; of course the paladin would see that they are getting the “Sacred Oath” feature for multiple times within their feature column, for an instance, each and every time you would see this, the consult a section of player’s Handbook by your selected subclass for finding it out about what new benefit you are about to get.

Have you ever thought about the other special type of the feature that is an ability score improvement. Of course this will also happen in a multiple ways for multiple times throughout the level up table. Each and every class could always gain this feature at similar levels, and of course the first example is at 4th level. Whenever you would see this, you can have two options to be able to selecting them from:

The most standard feats are found on a page at 165th of Player’s Handbook. Even beyond this though, suppose some of the other official supplements and also the home-brew materials are provide an immense library of different options, some of them are even with specific restrictions. You can see if any type of appeal to you and also pass them by the DM, mainly if something has been customized. The feat selection could be clearly intimidating too. So in this way the rest of them have been assured about selecting for increasing the stats instead of great choice no matter what type of character that you play.

Some more things are relevant for certain kinds of characters to check. All they are mentioned below:

Not all of your classes could get the spells, and also not all of the classes could get the similar kind of spells. Of course these could especially be like confusing, so check out your level up table and also the Spellcasting section of your class description for the better reference. Here the major points have been mentioned on your level up table are:

For spellcasters too, your cantrips which could deal with the damage that would enhance in a strength as you do usually. However this is to make sure all of your magic powers that keep up with non-magical classes, and it occurs at different levels from them levels 5, 11, and 17 are most frequently. This strength could enhance has been noted directly in the text of a spell itself (not in your level up table). So you must make sure to be remember to checkout whether your cantrips gain any bonuses when you are in a particular level.

Some of the races or the subraces has been granted their bonuses whenever you would level up, like the dwarven toughness, drow magic, or a dragonborn’s breath. You can take a quick look over to your race’s abilities to make sure that you are not missing anything.

In your level up table there might be something special that we have not covered them here, and of course it is most likely to be unique for your dnd class. You must be sure for checking the table for all of the improvements in things such as: