Objects become alive at your command. You can choose up to 10 non-magical objects that are not being worn or carried and are within your range. Targets that are medium are count as 2 objects, and if the targets are large and huge, then these are counted as four and eight objects respectively. The targets, that are larger than huge, you cannot animate them. With the spell, each target animates and become the creature under your control. It remains in the creature form until reduced to 0 hit points or until the Animate Objects5e spell ends.

With a bonus action, you will be able to mentally command any creature that you made with this spell and is within the 500 feet of you. In case you control multiple creatures, you can command them all at the same time by giving them same command).

When the creature is in your control, then you decide what action will it take as well as where it will move on its next turn. Moreover, you can give a general command like to protect a specific chamber or corridor. And, in case you don’t give it any command then it will only defend itself from the hostile creatures. Once you give it a command it follows that command until the task is completed.

An object that becomes a creature with the spell is constructed with hit points, Strength, AC and Dexterity determined by its size. Constitution of animated object is 10, Charisma is 1 and, Intelligence and wisdom are 3. The speed of it is 30 feet. It also has a flying speed of 30 feet. The speed of the animated object is 0 in case it is attached securely to a surface or any other huge object, like chain, bolted to a wall. It only can see within a radius of 30 feet. Animated object returns to its original form when it drops to 0 hit points.

It can make a melee attack against a creature within 5 feet of range on your command. With a bonus attack, it can make a slam attack.

Using a spell slot of 6th level allows you to animate 2 additional objects for each slot level above 5th. 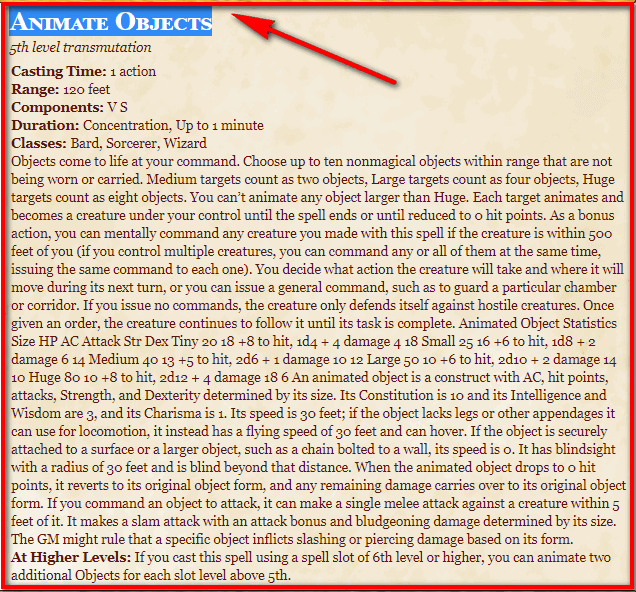