Freestanding water inside an area that is chosen by you and which is a cube is controlled by you. You have control over this freestanding water until the spell ends. Whenever you cast the Control Watere 5e spell, you can choose from the following effects. You can choose the same or different effect as an action on your turn.

Part Water – You cause the water to move and create a trench in the area. The trench extends across the area of the spell, and the separate water makes a wall on both sides. The trench remains until a different spell is chosen by you or until the spell ends. After that water slowly fills in the trench over the course of the subsequent round. It continues to fill until the normal level of water is restored.

Flood – You cause the standing water level that is in the area to rise by up to 20 feet. If there is a shore in the area then the flooding water spills over onto the dry land. In case you choose an area in a large body of water, you can create a 20-foot tall wave that travels from one side to other and then crashes down. And, all the huge and smaller vehicles that come in the path of the wave, are carried to the other side by the wave. There is 25 % chance of capsizing any small or huge vehicles that are struck by the wave.

The level of the water remains elevated until you choose a different effect or until the spell ends. You can even chose modify memory 5e if it is eligible for you.

Redirect Flow – You cause the flowing water to move in your desired direction. The water moves according to your direction only if it is in spell’s area. When it moves beyond the area of the spell then it flows according to the terrain conditions. The water continues to move in your desired direction until you choose a different effect or until the spell ends.

Whirlpool – For this effect, a body of at least 50 feet square and 25 feet deep water is required. You form a whirlpool in the middle of the area. The Whirlpool forms a vortex. This vortex is up to 50 feet wide at the top, 5 feet wide at the base and 25 feet tall. The vortex pulls any creature or object towards it that is within 25 feet of it. By making a strength check against your spell save DC, a creature can swim away from it.

An object takes 2d8 bludgeoning damage when it enters the vortex for the first time, it. This damage occurs every round it remains in the vortex. 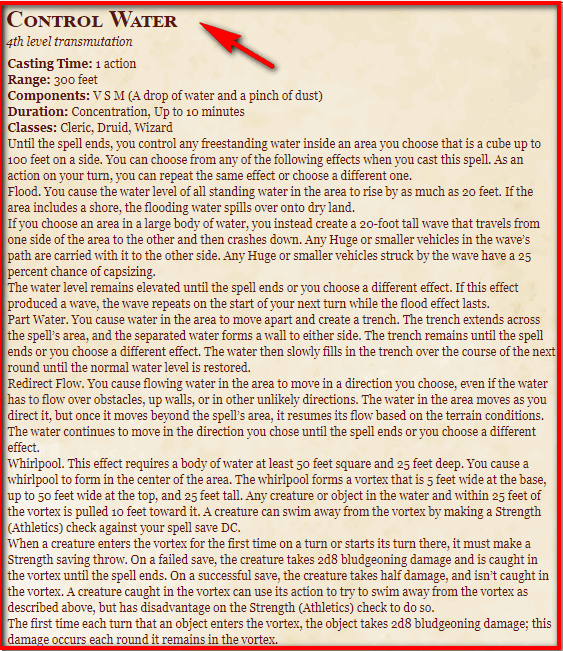