A creature which was targetted by this spell must make a Dexterity saving throw, the target will take 10d6+40 force damage on a failed save. If the target is reduced by the damage to “0” hit points then it is disintegrated.

Except for the magic item, the disintegrated 5e creature and everything which is wearing it and carrying will be reduced to a pile of fine gray dust and the creature can be restored to its life by the True resurrection or a Wish spell.

This spell automatically can disintegrate a small or large nonmagical object or a creation of the magical force. Suppose the target is a huge or a larger object or it could be a creation of force and this spell will disintegrate the 10-foot cube portion of it. By this spell, a magic item will be unaffected. Any how You might have missed the message 5e spell to play with it once use it you will get more fun while playing with your DM.

By using the spell slot of 7th level or higher you can cast this spell and the damage will increase by 3d6 for each slot above the 6th level. 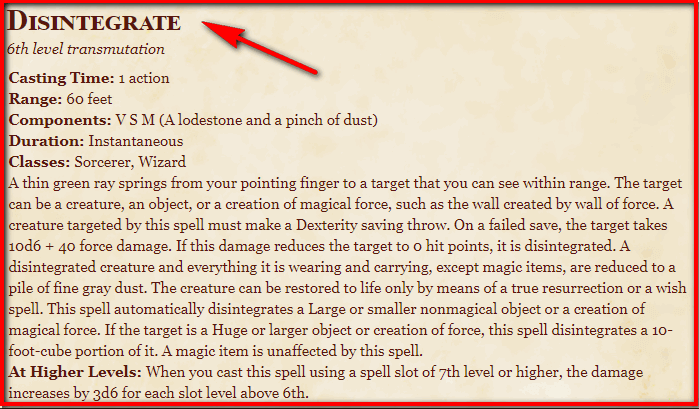