You try to charm a beast in a deceptive way within range that you have vision of. It will get charmed by you for the duration if it fails its wisdom saving throw. If you or your ally creatures are fighting it, then it will have an advantage on the wisdom saving throw and a higher chance in succeeding at it.

After charming the beast, you will have a telepathic link with it so long as both of you are on the same plane of existence. This telepathic link will allow you to issue commands to the creature while you’re conscious( no specific actions required). The creature will try its best to obey and follow the command given to it.

You can command easy and simple tasks like Attack that creature, Run over here, or Fetch that object. Once the creature completes its order and doesn’t receive any further direction from you, it will try to defend and get free of the spell’s power in the best of its ability.

Your actions can control the mind and life of the target as you wish, that is if you use your action to take total control and order precise actions off of the target. Until the end of your next move, the creature will not do anything you haven’t allowed it to do and only takes actions you choose for it. During this time, you can make the creature use a reaction, but you have to use your own reaction as well for it to work.

Are you checking for astral projection 5e spell then read it now. 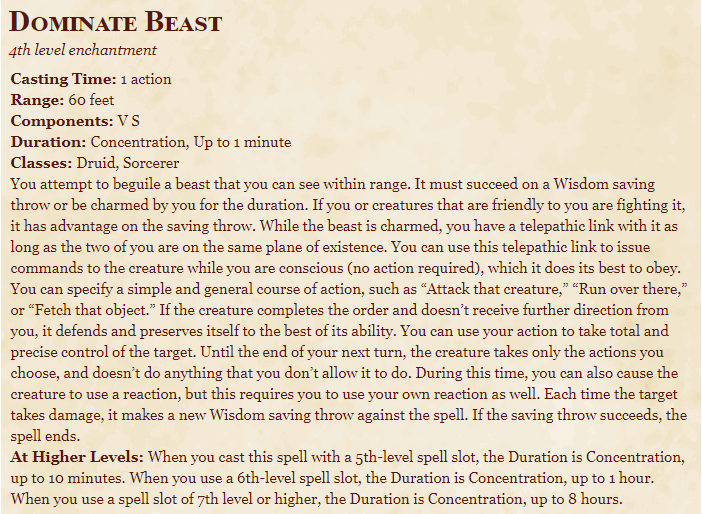