An image of a creature, an object or some other visible phenomenon that is not larger than a 20-foot cube, is created by you. This image appears at a spot that is visible to you within your range. It lasts for the duration. It looks completely real, including, smells, sounds, and temperature appropriate to the thing depicted. To cause damage, you cannot create sufficient heat or cold. You cannot create a sound that is loud enough to deal thunder damage or deafen a creature and also you cannot create a smell that can sicken a creature.

With your actions, you can cause the image to move to any other spot that is within range. But for that, you should be within the range of illusion. When the image changes its location, by that time you can alter the appearance of the image so that its movement appears natural for the image. For instance, suppose you create an image of a creature and move it, you can alter it in such a way that it appears to be walking. Just like this, you can cause the illusion to make different sounds at different times.

Physical interaction with the image can reveal that it is illusion as things can pass through it. A creature that uses its action to observe the image can decide that it is an illusion with an effective Intelligence (Investigation) check against your spell save DC.

In case a creature discerns the illusion for what it is, then the creature can see through the image. And, the other sensory qualities of the image become faint to the creature.

When you use a spell slot of 6th level or higher than this to cast Major Image 5e spell, the spell lasts until dispelled. And, it doesn’t require your concentration. 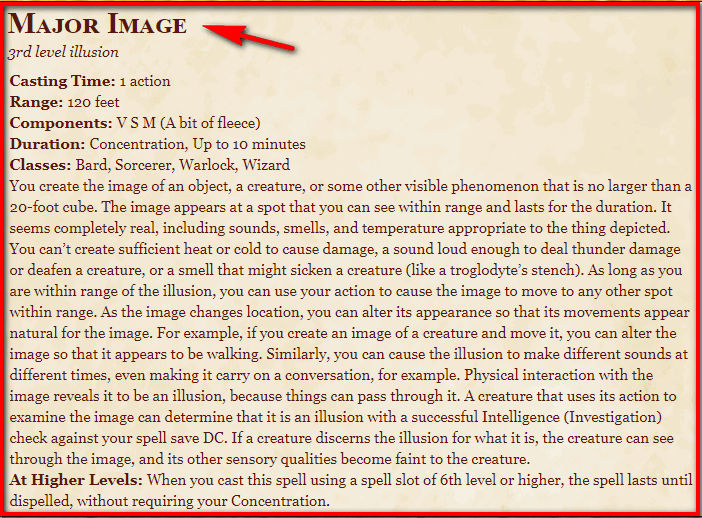