A course of activity is suggested by you that is limited to a sentence or two, and this can influence up to 12 creatures of your choice that can be seen within your range and also can hear and understand you. Those creatures that cannot be charmed are immune to this effect.

The suggestion should be written in words in such a manner that the manner of action should be sound reasonable. Harmful acts automatically negates the effect on the spell, for instance, asking the creature to stab itself, throw itself onto a spear, immolate itself or asking to do some other harmful act.

Every target must make a Wisdom saving throw. It pursues the course of action you described to the best of its ability on a failed save. For the entire duration, the suggested course of action can be continued. The spell ends when the subject finishes what it was asked to do if the suggested activity can be completed in a shorter time.

Also, you can specify conditions that will trigger a distinctive activity throughout the duration. For instance, you can suggest that a group of soldiers give their whole money to the beggar they meet first. The activity isn’t performed if the condition is not met before the Mass Suggestion 5e spell end.

For the creature, the spell ends in case you or any of your companions damage a creature affected by this spell.

We also tested so many dnd 5e spells and excited so much while using them, from them we’re recommending you to read the sunbeam 5e spell among all of our blog posts. 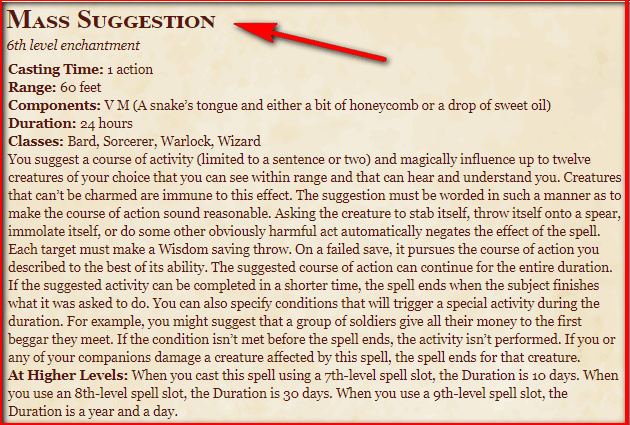