An area around the point you touch is infused by you with a holy or unholy power. The radius of the area can be up to 60 feet. In case the radius includes an area which is already under the effect of a hallow 5e spell, the spell fails. The area that is affected is subject to the below effects.

First, fey, elementals, fiends, celestials, and undead cannot enter that area. Moreover, such creatures cannot frighten charm or possess creatures that are within this area. If any creature scared, charmed or controlled by such a creature then it is no longer charmed, controlled or scared upon entering the area. From this effect, you can exclude some creatures of those types.

Second, you are able to bind an extra effect to the area. You can choose the effect that is offered by the GM or you can choose one from the following list. A number of effects apply to creatures that are within the region; you may elect whether the effect applies to all creatures, creatures that follow a particular deity or chief, or creatures of a specific type, including orcs or trolls.

If a creature that is most likely to be affected by the spell’s area enters for the first time on a turn or starts its turn there, then it can make a Charisma saving throw. The creature ignores the extra effect until it leaves that area if the save is successful.00

Courage – When the creatures that are affected are in the area, then no one can frighten them

Darkness – Darkness fills the area. The area cannot be illuminated by the normal light or magical light that is created by the spells of a lower level than the slot you used to cast this spell.

Daylight – Bright light fills the region. The light cannot be extinguished by the magical darkness that is created by the spells of a lower level than the slot you used to cast this spell.

Energy Protection – except for piercing, bludgeoning or slashing, creatures that are affected in the region have resistance to a damage type of your choice,

Energy Vulnerability – Those creatures that are affected in the region have a vulnerability to one damage type of your choice, except bludgeoning, slashing or piercing.

Everlasting Rest – Interred dead bodies in the area cannot be turned into undead.

Fear – While in the area, affected creatures are frightened

Silence – No sound can reach into the area and no sound can emanate from within it.

Tongues – Even without sharing a common language, affected creatures can communicate with any other creature in the area. 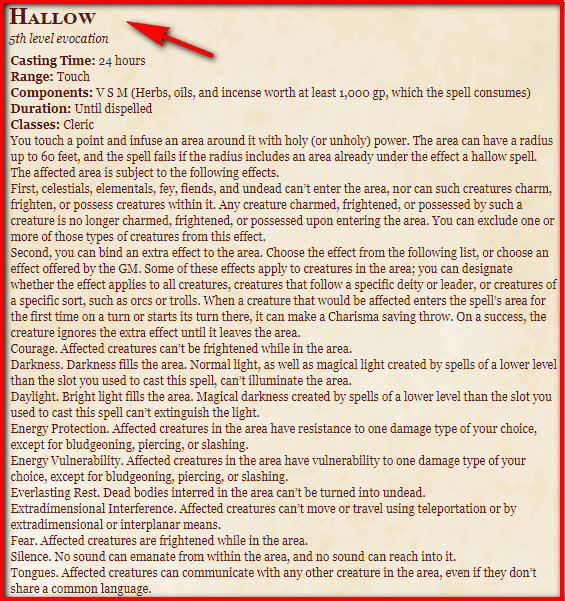