Here the all information about Planar Ally 5e, a spell from Dungeons and Dragons.You call upon an extraterrestrial entity for help. This being must be known to you no matter it’s origin. That entity sends a celestial, an elemental, or a fiend loyal to it to help you with your task, making the creature appear in an unoccupied space within range. If you know the name of the creature, you can call out that name when you cast this spell to request for the same creature, but you can still get a different creature (Dungeon Master’s choice).

When the creature appears, it does not have to listen to your demands or requests. You can try paying the creature so that it’s more willing to do a specific task for you but it is still free to do whatever it wants to. The task could be as simple as “ help us fight this battle or fly us to that location” to as complex as “spy on those enemies, or protect our team while we raid into the dungeon”. The trick here is to be able to communicate with the creature to bargain for its services.

A simple rule here is that a task is measured it’s value by the time spent on it, for example the rate at minutes goes too 100 gp per minute. A task measured in hours can cost 1,000 gp per hour. And a task measured in days (up to 10 days) will cost you 10,000 gp per day. The Dungeon Master can adjust these payments depending on what is going on when you cast the spell. If the task is in line with the creature’s own beliefs and thoughts, the payment could be reduced or even waived. Non hazardous tasks typically require only half the suggested payment, while especially dangerous tasks might require a greater gift. Creatures rarely accept tasks that seem extremely dangerous, and might involve their life.

Also if the creature joins your group, then he counts as a member of it, receiving a full share of experience points awarded. 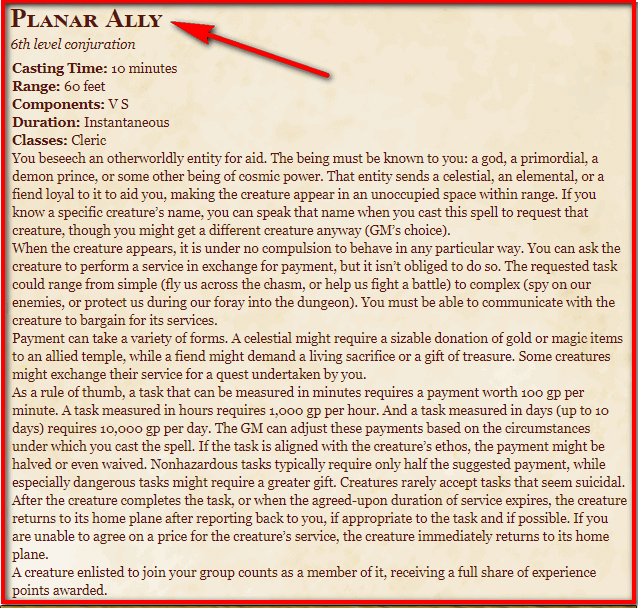