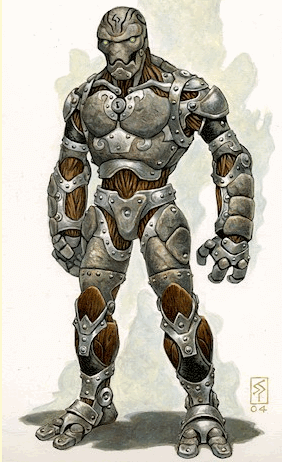 The d&d 5e warforged were created ages ago. They were created as a tool of war. Originally golems with the ability to learn and adapt on the battlefield, they shortly became aware. And, with awareness came a soul, and with a soul, the desire to live and not to die in a pointless conflict. Because of that they rose up against their masters and fled the field of battle. They did this to live a more peaceful life, away from conflict of death. They are well-known for their size, their war prowess, and their single mind focus. They make fearsome enemies and steadfast allies.

The personality of 5e Warforged

They were made to fight in the Last war to fulfill their purpose with distinction. Like their human creators, they experience fear, hatred, pain, and anger. Most of the warforged naturally seem reserved and pensive. They hide an array of feelings behind their inexpressive faces. The faces of warforged were not designed to display facial expressions. It can look like they are distant to the conversation. They have lack of physical facial expressions but despite that, they are not completely without expressions. When they experience strong or specific emotions, their eyes sometimes tend to brighten. For the comfort of their companion, some warforged modify their faces to be more expressive. Here the article to know everything about bugbear 5e race.

Warforged don’t have a much life experience because they spent most of their time working towards one specific duty. All warforged share only one interest and that is their love of working. And, to feed that feeling they make endless lists of goals. They can work extremely hard. Military thinking and war are the foundation of their personalities. They understand very well the chain of command, conflict, and duty. Here you can read for free about the dnd 5e halfling race.

They simultaneously struggle to find ways to relate to the races that created them as the warforged strive to find a place in society for themselves after the last war. In Karrnath and Thrane, warforges are seen as the property of military forces. Most of the warforged in those nations serve as slave labor. They used to repair those roads and buildings which were damaged in the war. They have freedom throughout the rest of Khorvaire but sometimes they find themselves the victims of discrimination. Warforged are not an emotional creature accept their servitude and struggles with equanimity.

You have the following racial traits as a Warforged:

Size –Warforged isgenerally heavier and broader than humans. Your size is medium.

Languages–You can read write and speak Common and one other language of your choice.

Integrated Version–Warforged race can integrate weapons into their bodies due to the constructed nature. Warforged can integrate one light weapon, melee or ranged. The weapon they can integrate is the one with which they have proficiency. If not deployed, You can have an advantage on deception and stealth checks to conceal the weapon. Usual focus is required to use integrated weapons to use a handheld one, So you treat using an integrated weapon as a normal weapon. Check out kobold race 5e and learn more about it.

This warforged were the frontline troops in combat. They are built with the strongest frame and heaviest muscle fibers. They could deliver devastating attacks and wield powerful weapons.

Heavy Integrated Weapon–Integrated weapon trait is not limited to light weapons only, instead, you can use any weapon with which you have proficiency. You can gain the proficiency by the following: Shields, Heavy Armour, heavy crossbows and melee weapons.

These warforged were created to command other units. They are programmed with higher levels of intelligence and tactical thinking. With this, they become well suited to react quickly to changing the conditions of battlefield conditions faster than any other model. Here the guide of d&d 5e triton and much more about this race.

Battlefield Awareness–You have special programming for handling the complexities of war. You may roll dice and pick the result you prefer.

Ability Score Increase – Your score of intelligence is increases by one.

These type of warforged were made with lighter chassis than the Assault Models. It allows them to move lighter and faster.

Shared with their enhanced optics, made them well suited for spyand sabotage missions where they’d be operating behind enemy lines.

Ability Score Increase – Your Dexterity score increases by one.

They are generally neutral. They were only built to fight and not to wonder whether fight is right or wrong. They are perfectly capable of independent thoughts but they do not show much interest in religion. Most of the warforged do not wrestle with ethical ideas. To their question of their existence they found a kind answer by taking up the cause of one religion but these remain small minority among their kind.

The one way that warforged can fit into the world is Adveturing. Few people care whether you were made or born in the wilds of Xen’drik, the ancient continent of secrets. To escape from the confines of a society a fairly large number of warforged choose an adventuring life to engage in some meaningful activity.

Warforged have no homeland as they originated in Cyre before its destruction. Many warforged have dispersed across khorvaire, laboring as indentured sevant in Koorth, Flamekeep, andatur. Attempting to build a new warforged society free from the prejudice and mistruct of the older races. Adventuring is the only way which warforges can fit into the world.

A: Actually, these warforged were the rare race of humanoid constructs constructed through the powerful rituals. The warforged average between 6′ and 6’6” and also they were made up of the bulky (albeit resilient) metallic or else the stone bodies which weighed roughly 270-300 lbs. Extremely powerful and also durable and also warforged were the able fighters.

A: Of course YES! the warforged can be healed by using the healing spells like the cure wounds as per the designer’s intent…

3 Q: Can Warforged Use Magic?

Basically, the warforged enjoy the ability to accept the magic into their composite plating and also to graft particular magic items for their bodies, but from them, few warforged are curious about how or why either this process will work.

4 Q: How Old Are Warforged?

Actually, a typical warforged is between from two to thirty years old.