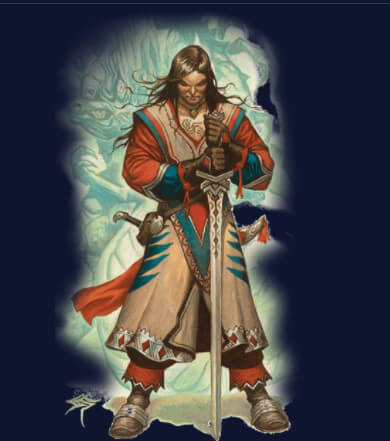 Kalashtar are the compound race created from the union of a human and renegade spirits from the various plane of dreams (these spirits are known as quori). Kalashtar are seen as wise, spiritual people with great compassion for others, but of course there are some unmistakable alien qualities to the Kalashtar as they are haunted by the conflicts of their otherworldly spirits.

Ability Score Increase: Your Wisdom and Charisma scores are both increased by 1. Additionally, any ability of your choice can be increased by 1.
Age: Kalashtar have a similar lifespan to humans and also develop at a similar rate.

Alignment: The noble spirit tied to Kalashtar lead them to be Lawful Good or Neutral Good.

Size: Kalashtar are similar in build to humans, though they are on average a few inches taller. Your size is always medium.

Speed: Your walking speed is 30 feet.

Dual Mind: Whenever you make a Wisdom saving throw, you can use your reaction to gain an advantage on the roll. You can use this trait immediately before or after you make roll.

Mental Discipline: You have partial resistance to psychic damage.

Mind Link: You have the capability to speak telepathically with any type of creature that you can see within 60 feet. Given you are communicating telepathically, you do not have to know the creature’s native language for it to understand your messages.

When you’re using this trait to speak telepathically to a creature, you can use your action to give that creature the ability to speak telepathically with you for 1 hour or until you end this effect as an action. To use this ability, the creature must be able to see you and must be within this trait’s range. You can give this ability to only one creature at a time; giving it to a creature takes it away from another creature who has it.

Psychic Glamour: You can select one of the mentioned skills such as : Insight, Intimidation, Performance, or Persuasion. You have advantage on all ability checks you make with that skill.

Severed from Dreams: Kalashtar sleep, but they don’t connect to the plane of dreams as other creatures do. Instead, their minds draw from the memories of their otherworldly spirit while they sleep. As such, you are immune to magical spells and effects that require you to dream, like the Dream spell, but not to spells and effects that put you to sleep, like the Sleep spell.

Languages: You can speak, read, and write Common, Quori, and one other language of your choice.