Despite their highly aggressive and industrious nature, Kobolds are actually quite small and weak. This leaves them in precarious positions when around creatures who are stronger and more powerful than they are; although, in these situations Kobolds will rely upon their intelligence to outmaneuver these stronger creatures. The ultimate goal for the Kobold species is to conquer as much land as possible and at any cost, leading them to deploy traps and overwhelm enemies with their sheer numbers. 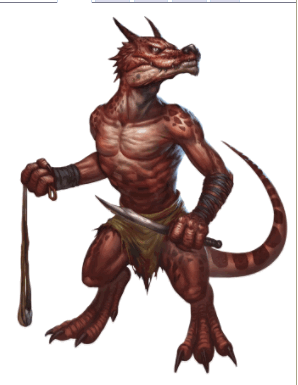 Standing between 2′ and 2’6″ and weighing no more than 45lbs, Kobolds tend to be resentful of larger creatures, particularly those who poke fun at them for their size.

Both the males and the females have different names that they are called by.

Speed: Your walking speed is 30ft.

Ability score: Your Dexterity is increased by 2.

Age: Kobolds are known to live for a long time, upwards of 120 years, though this is not common.

Kobolds belong to a class of reptile humanoids, and as such, their body is covered with scales. Their skin color is typically a dark brown, orange, and/or black. Kobolds have a face similar to a crocodile with horns protruding from the top and red eyes. In addition to these, they have clawed fingers and a rat-like tail. Their tail is how Kobolds. It is through their tail that Kobolds show emotions, as their face is incapable of showing expressions.

Although they may be small, their powerful jaws help them to target and attack any creature. While most Kobolds cannot fly, there are few fortunate ones with wings who are able to do so. These Kobolds are referred to as “Urds”; flying is considered to be a special gift from the Queen Dragon, causing other Kobolds to be quite envious of them.

Kobolds are fond of dark places and prefer dwelling in either thick forests or underground rather than being out in the sunshine. Kobold tribes will split up when the group grows too large as conflict would often ensue; however, this did not always resolve conflict among the Kobold as tribes would occasionally behave aggressively toward outside members. Kobolds have a monstrous nature and will remove and replace their leader should it be necessary. Despite this, Kobolds do tend to be respectiful of leaders and obey dilligently, even more so should that leader be of lawful evil alignment.

Kobolds are not known for fashion, dressing in simple tunics or breeches; but when it comes to any festivity or celebratory occasion, you will find them well-dressed. Dresses worn by leaders are made of high-quality fabrics like silk and leather, often colored in shades of red and orange, to distinguish themselves from other tribe members. They accompany their clothing with precious stones readily available to them given Kobolds are industrious miners.

Hatred for the other Kobolds is a quality that you will find in all the Kobolds. They will try to kill, hurt and destroy them by any means. They have hatred for everyone. Their only motive is to trap as much land they can so that they become the rulers of the same and are able to expand their tribe. This made possible through the traps and digging mines just to fulfil the motive. They are highly creative in such things and focus on expansion of the land itself.

The planning was done secretly with the general plan being known to everyone while the detailed plan to the people who would work in it. In this way they are able to maintain complete secrecy and accomplish the purpose. The lawful evil is what their tribe is based on.

They love to be secluded from their tribe and enjoy being alone. For them their race or tribe comes first and there is no compromise with the same. This is the reason that they are able to reach the heights of success in whatever they do.

Kobolds rely upon their sheer numbers and cunning nature to defeat enemies. They prefer to utilize traps and ambushes to weaken an enemy before attacking directly. Their traps can range from simple tripwires and poisoned foods, to more violent traps such as spike pits and boiling oil. Should their numbers ever fall to the point they no longer outnumbered their enemy, the Kobold will flee.

Kobolds will loot wheatever treasure their enemy, who were usually killed. Those who aren’t killed were typically enslaved and later sold, aside from gnomes who the Kobold would always killed.

Mining – Rock mining is a very popular activity for Kobolds. Every family had two or three miners in them and had a long history associated with it, which was documented with pictures on a family rock wall.

Crafting – Another popular activity among Kobolds is crafting (typically jewlery) or trap making.

Q: Why do Kobolds hate gnomes?

A: Because of the “Prank” which is played upon the Kurtulmak by the gnomish deity Garl Glittergold.

Q: What are Kobolds afraid of?

A: Individually, they’re affraid of everything

A: Here a female kobold will lay a clutch of the hard-shelled eggs and then two weeks after the fertilization.

A: Yes, the kobold can swim. Actually, aquatic kobold has the swim speed of 40 feet.