Orcs are a race of humanoids. Orcs are considered a threat to the civilized cultures of Toril. Whether it is united under the leadership of a powerful warlock, or fought with stability after the years of conflict, the Orc and human tribes occasionally combine; the forces are encompassed extensively to the fear of the settled civilized land. Half-orcs are born when these alliances are sealed by marriage. Some of the half-orcs rise to become the chiefs of their tribes and the other venture into the world to prove their worth among civilized races. 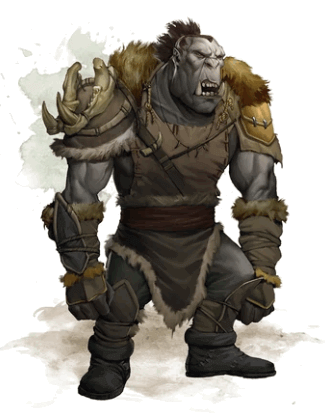 Age: Orcs live for a relatively short time, maturing around 14 years old and live to 40 years on average.

Ability Score Increase: Your Strength is increased by 2.

Speed: Your base walking speed is 30 feet.

Languages: You can speak, read, and write Common and Orcish.

The origin of Orcs is unknown. They seem like the non-native of Toril and Abeir. First legends of orcs told of the wars between CorellonLarethian and Gruumsh. Gruumsh is their primary god and CorellonLarethian is the creator of the elves and eladrin. The latter two races told of howGruumsh was beaten by Corellon.

Corellon took his eye. Most of the orcs denied this charge and acknowledged Gruumsh as the one-eyed god. During the Days of Thunder when the Abeir-Toril was united, the first orcs were brought to the world by the creator races.

After some timeI, maskari repeated the similar mistake of opening up another portal through which the gray orcs appeared and Orcgate wars was the result of this. In this war, Gruumsh and his allies slew a lot of untheric Pantheon. Finally, the portal was closed and remained behind was orcs’ new breed.

While Orcs vary in appearance, the physical qualities are same. Usually, orcs have grey skin, stooped postures, coarse hair, large muscular bodies, low forehead and porcine faces. Most of the orcs also have wolf-like ears that are pointed on the ends, just like the ears of elves.

They are roughly the same size as humans, though they are usually muscular and robust. The adult males usually stand between 59 to 71 inches tall and the female adults are 2 inches shorter. Most of the males weigh between 136 to 190 pounds and females weigh between 6 to 150 pounds.

Orcs breed quickly and live shorter lives compared to other races. They are considered adults between the ages of 11 – 14, middle-aged at 17, and old by 23. Orcs are venerable at the age of 35. The average orc rarely survives for more than 40 years, even if it managed to escape from violent deaths.

Orcs have a stereotype of very poor temperament and angering easily, and most Orcs certainly live up to this stereotype. Impatient and easily offended, Orcs generally prefer violent solutions and hardly consider more amicable, diplomatic ways of approaching their problems. Despite this, Orcs are creatures of action, not of thought, and regularly achieve their goals as a result of diving in headfirst (sometimes literally) to solve their problems.

The old Orcish culture was very aggressive, a fact perfectly symbolized their their constant planning for, and engaging in, war. They believed that to survive, one must control as many resources as possible, leading them to the conquest  of potential rivals. This put them squarely at odds with other races and occasionally other Orc colonies.  Orcish societies tended to be dominated by males, who pride themselves on the number of sons and wives they had, as well as their battle scars – a sign of their conquests and fearlessness to engage in battle.

Orcs seldom build cities, instead relying on the cities and villages left behind of those who flee or are conquered. The tools of the Orcs are more inferior to the other races, though they do manage stonework and ironwork, seemingly living in the Iron Age. Despite separations and occasional conflict, Orcs are part of a federation of tribes organized by a chieftain.

Orcs can be found in the many parts of the Toril, with some areas having a higher concentration than the others. Marauding bands are usually found in the northern mountain ranges of the world. Gray orcs are easily found near the portal from which they emerged in High Imaskar.

Gray Orcs: This subrace is more civilized than the other subraces which were brought to Faerûn during the Orcgate Wars. A gray orc tribe consists of 30 – 50 members. The tribe is led by the strongest orc in the tribe, known as a chieftain, though the true power of gray Orc tribes is believed to lie within the priest of the tribe. Gray Orcs worship the various Orc deities equally. Gruumsh is the leader of these deities; however, Gray Orcs do not feel bound to worship him above other deities, instead opting to select a deity that closely aligns with their particular interests.

Mountain orcs: This is the most common subrace of Orcs and are easily found in most of Faerun.

Orogs: This subrace descends from the Mountain Orcs, the latter of which preside in the Underdark. Orogs are also commonly referred to as Greater Orcs or Elite Orcs. It is believed that this subrace is the result of the union of the female ogre and male orc. Orogs are much stronger and stockier than the other orcs, towering above 6 feet tall. The military units of Orogs are highly organized and far more dangerous than clans of average Orcs. Within an orc community, Orogs quickly rise to leadership positions within their clan.

Neo-Orogs: This subrace is a magical hybrid of the orogs, gray orcs, and other creatures. They are generally split into two groups, black and red.

Ondontis: A pacifist cousin of the fey nature orc.

Ogrillons: This subrace is the result of orcs breeding with ogres.

Boogins: This subrace is the result of mountain orcs breeding with quaggoths.

A: Basically, the Orcs prefer to wear the colors which most of the humans think unpleasant: like blood is red, rust red, mustard yellow, yellow green, moss green, greenish purle and the blackish brown.

A: Because of their orcish blood, half Orcs are on poor terms with other Orcs. Actually, the orc’s haven’t native lands; they frequently live among the orc’s. Whenever it not living among the orc tribes and the half-orcs almost always live in the human lands, like the humans are more accepting of the half-orcs than the other races.

Q3: Where do Orcs come from?

A: Orcs can be found throughout most of Faerûn and which they travel through along the mountain ranges which descended from the spine of the world in the far north.

A: Orcs were created by the first dark lord and the Morgoth. Before the first age and also served him and then later his successor in their quest to dominate the middle earth. But before the Oromë first found the elves at the Cuiviénen, Melkor kidnapped and also some of them are cruelly tortured and twisting them into the first orcs.