Tortles live a very simple life as peaceful farmers on the Savage Coast of Mystara. It is a region which has expanded as the mini setting of Red Steel. By nature, Tortles are inoffensive, but will fight to defend their homes and are naturally good as tanks. They have never managed to get any semi-official update to later editions like their fellow Red-Steel introduces the Aranea. 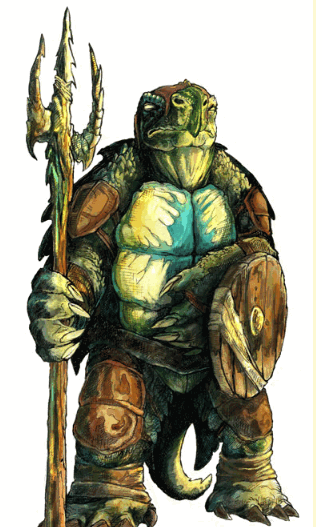 What most Tortles consider a simple life, others might call a life of adventure. Most of them are born near sandy coastlines and as soon as they can walk, they become nomad survivalists eager to explore the wilderness.

Age: After birth, young Tortles crawl for a few weeks before learning to walk on two legs. Tortles reach adulthood by the age of 15 and live on average for 50 years. Tortle

Size: Adult Tortles stand five to six feet tall and weigh around 350lbs. One-third weight is of their shells. The size of your Tortle is medium.

Alignment: Tortles lead ritualistic and orderly lives. As they age, they become more set in their ways by developing customs and routines. A few of them are selfish and greedy and tend more toward evil, but most are lawful good. For a Tortle, it is unusual to shuck off the order in the favor of chaos.

Speed: 30 feet is your base walking speed

Shell Defense: You can withdraw into your shell as an action. When doing so, you gain a +4 bonus to AC until you emerge. Here you have an advantage on Constitution and Strength saving throws, however, you have disadvantage on Dexterity saving throws. You are considered prone while you are in your shell, and your speed is 0 feet. You cannot take an action and can only use a bonus action to emerge from your shell.

Claws: Your claws are natural weapons and can be used to make unarmed strikes. When striking  with your claws, you deal slashing damage equal to 1d4 + your Strength modifier, instead of the bludgeoning damage normal for an unarmed strike.

Natural Armor: You are ill-suited to wearing armor due to the shape of your body and shell. Your shell provides ample protection, giving you a natural base AC of 17. You do not gain any benefit from wearing armor, although you can apply a shield’s bonus AC when equipping and using a shield.

Hold Breath: Tortles can hold their breath for up to 1 hour. Tortles are not natural swimmers, but they can remain underwater for some time before needing to come up for air.

Languages: You can write, read and speak Common and Aquan.

Bite Attack: Whenever you hit a creature with a melee attack on your tum, you can use a bonus action to deliver a vicious bite attack against your enemy. . The target takes 1d4 + your strength modifier piercing damage on a hit. You are always considered proficient with this bonus attack.

Tortles are humanoid tortoises. Tortles walk upright with a ponderous and rolling gait. They have leathery, reptilian skin, and shells that cover their backs and bellies. Tortles grow up to 6 feet tall and weigh more than 750lbs.

Tortles don’t have hair. The color of their skin is blue-green or olive. Their back shells are shinier and usually darker than their skin color, while their front shells are lighter and have a yellowish cast. They have a beak-like and toothless mouth and able to deliver a vicious bite.

Tortles are stocky, with their shells consisting of most of their weight; their hands and arms are similar in shape to other humanoids’ hands and arms, the only difference being that Tortles’ arms and hands are thicker. Most  Tortles wear no clothing, though some may wear belts, cloaks, and harnesses for carrying supplies and tools. They can wield most weapons as easily as humans.

Tortles live under the servitude of the Chief of the Tribe, who rules like a king. Tortles tend to be reclusive and peaceful, and get along well with the other races that have similar personalities and habits, particularly Lizardfolk. There are only a few races that are able to look past the reptilian aspects of both their species, and because of this similarity, they tend to get along through mutual understanding.

Tortles walk and speak in a lower and milder fashion than the other dwellers of the material plane. They generally live in harmony with nature, aside from using the slash and burn farming method. Tortles are ignorant of technology and live in hunter style tribes,  generally residing in straw and mud huts.

Tortles don’t mate until they approach the final years of their lives; after mating, they die within a year. All females who are ready to produce eggs gather in a specially prepared compound. Males guard the compound against all attacks. The eggs of Tortles are considered delicacies, so the locations of the egg-laying ground is always protected with maximum security. Each female lays anywhere from 4 – 24 eggs. These eggs hatch about 6 months later,resulting in massive tribes that span miles across the land.

Tortles who are Clerics, Monks, or Paladins worship one of four deities. This is the belief of the Tortles that these four gods work together in harmony, keeping the balance of nature intact and sharing the prosperity of those who worship them.

These tribes can be found in marshland and swamps areas. Among Tortles, Razorbacks are the most untrusting. Their shells are covered with sharp ridges and barbs and usually painted in paints.

Razor Fist: A Razorback can perform an unarmed strike as an action. This strike does 1d4 + your Strength modifier of piercing damage. This is not a bonus action.

Razorback: You can use your reaction to cause a melee attacker to take 1d4 piercing damage from the barbs on your shell.

These tribes can be found in the desert and in the other arid/mountainous areas. Usually, these Tortles can be described as almost apathetic; they don’t care much for the affairs of other races, but this doesn’t make them rude or unfriendly. The shells of these Tortles are hard, round domes and are polished by the sands picked up by the winds.

Nomad: You are proficient in survival skill.

Shell Master: A desert monster can use their shell to block attacks and saving throws.

These tribes can be found by Riverside or near the coast. These Tortles are the friendliest of all three types of Tortles and always ready to help.  Shells of these Tortles are flat and fleshy, offer very little protection.

Ability Score Increase – Your Wisdom score is increased by 1

Tortle Agility–Tortles gain unarmored movement. Your walking and swimming speeds increase by 15 and 5 feet respectively. Unless you gain the ability from a class, this doesn’t increase with your Level.

Softshell: Naturural Armor of a Softshell Tortle is 13 + your Dexterity modifier.

Q1: What Book Is The Tortle In?

A: Actually, the Tortle package is the supplement for the DnD 5e adventure, Tomb of Annihilation. It describes the Chultan island snout of the Omgar and describes details of the Tortle race.