An illusion is created by you of a creature, an object or some other phenomenon that is visible within the range that activates when a particular condition occurs. Until then, the illusion is imperceptible. It should up to 30 foot long. It is decided by you that when to cast the Programmed Illusion 5e spell and how will the illusion behaves. Moreover, what type of sound it makes is also decided by you. This scripted performance can last up to five minutes.

When your specified condition occurs, the illusion springs into existence and then it performs as you described. When the illusion finishes, it disappears and remains dormant for ten minutes. After 10 minutes, the illusion can be reactivated.

The condition that you triggered can be as detailed as you like, but it should be based on visual or audible conditions that occur within the range of 30 feet. For instance, you can make an illusion of yourself to appear and frighten off the others who try to open a trapped door. Also, you can set the illusion to activate simply when a creature says the right phrase or word.

Physical interaction with the image can reveal that it is an illusion. The reason behind is that things can pass through it. In case a creature discerns the illusion for what it is, then the creature can see through the image. And, any noise that image makes sounds hollow to the creature. 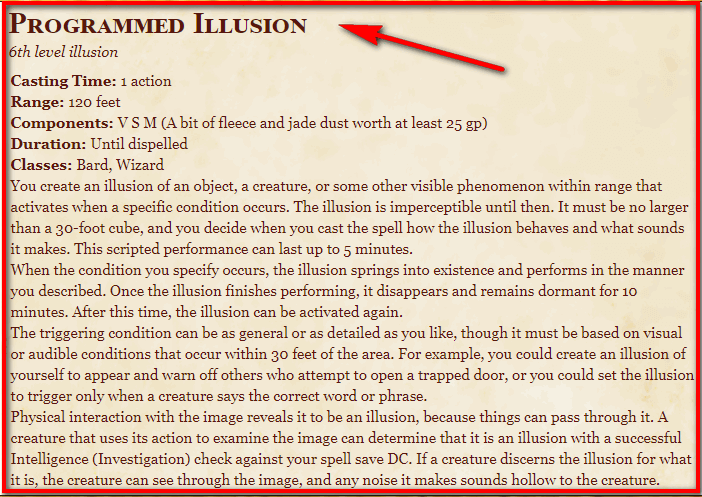