Half-Elves are usually defined as humanoids that are born through the union of a human and an elf. D&D 5e Half-elf often feel isolated, whether they are raised by a human parent or elven parent. It takes 20 years for them to reach adulthood. If half-elves are raised by elves they matured quickly.

Half-elves, who live among human 5e race, watch friends and loved ones aging while they are barely touched by time. Those who live with the elves, grow restless as they reach adulthood in elven realms. 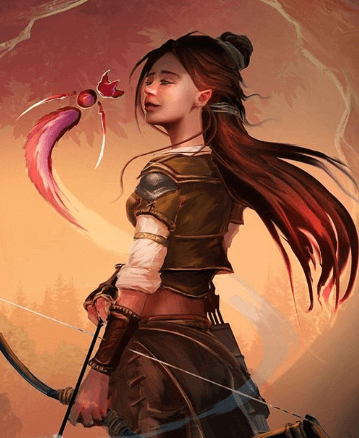 Humans think that half-elves look like elves and on the other hand elves think that they look like humans. In height, they are neither as broad as humans and nor as slender as elves. They are normally 5 to 6 feet tall and weigh between 100 to 180 pounds. Male half-elves are a bit taller and heavier than the female half-elf 5e. Males have facial hairs and also they grow beards to mask their elven ancestry. Once read dragonborn colors race article and learn about this race.

Some qualities of your 5e half-elf character are similar to elves while some are unique to half-elves.

Your score of Charisma increases by 2 and also two other ability scores increase by 1.

Just like humans, Half-elves reach adulthood at the age of twenty. Half-elves live for up to 180 years, much longer than humans.

They share the chaotic bent of their elven heritage. Personal freedom and creative expression are the values which they value the most. They have no love for leaders and also they don’t have the desire of followers.

The size of half-elves is same as humans. It ranges from 5 to 6 feet tall. Your size is medium.

Dark Vision – Because of your elf blood, you have great vision in dark and dim conditions. It is not easy to discern color in darkness. In the dim light, you can see within 60 feet as if it were a bright light.

Magic cannot put you sleep and also you have an advantage on saving throws against being charmed.

In two skills of your choice, you gain proficiency.

You can read, write and speak Elvish, Common and one extra language of your choice.

Half-elves don’t own a land. Though, human welcome them in their cities but elven forests they are somewhat less welcome. In large cities, sometimes half-elves are numerous enough that they can form small communities of their own. Half-elves enjoy each other’s company as only they are the ones who can understand what it is to live between two worlds. Check out the d&d elf race details and be better in D&D.

In most parts of the world, there are some half-elves who don’t like the company of other half-elves. One might live for years without meeting another.

D&D 5e Half-elf is 5 to 6 feet tall and has a wide variety of complexions. Half-elves usually adopt the hairstyle and dress of the culture which they are raised. To show their signs of dual heritage, half-elves raised among humans wear elven clothing. The size of the ears of the half-elves is same as humans but they were pointed at the end just like ears of elves. Half-moon elves generally showed a yellow, blue colored color around the ear and chin, while half sun elves had a more reminiscent of bronze with gold hair. Doesn’t matter what they wear, through the combination of physical distinctiveness and force of personality, half-elves stood out in a crowd. Compared to the humans, half-elves get mature at a lower rate. They can live up to 180 years. Want to know about tiefling dnd 5e then you can read about it for free.

From two heritages, half-elves gained an unusual blend of abilities. They are more innately charming and durable than elves or humans. Half-elves have great strength of adaptability as they can learn outside of their specialty. Like their elves parents, half-elves work well with others and also they can lend some of their own skills to their allies or friends. They also have the ability to see in low-light conditions. Their sight and hearing sense is more than the humans.

Half-elves are natural leaders and negotiators. They are unusually open-minded. Some of them manifested their leadership through bravery and confidence and the others are polite and cordial. Like their fey parents, half-elves are chaotic and free-spirited. Half-elves, like humans, leaned neither towards neither good nor evil. Half-elves are mostly found in large population areas where other races mingle freely.

Half-elves enjoy the company of gnomes, dwarves, and halflings. They are less than entirely trusting. Most of the half-elves often make excellent intermediaries between their two parent races. Half-elves often found themselves caught in the middle, where humans and elves were not on good terms.

Half-elves often take part in the magical traditions of human and elves. But they had no true magical traditions of their own. Many of the Aglarond got specialization in the schools of development and transmission, as the founder of the nation, Simbul had dined. Half-elves worship the Seldarine in the same way as elven parents do. Many half-elves worship the Eilistraee also. Despite having associated with Drow, a practice is particularly common among half-elven bards.

They had no true homeland but some half-elves are common in some regions like Gulthandor, Aglarond, and Luruar. They were also common in Cormyr and the High Forest before migrating towards the north. These religions had a highly concentrated population of half-elves. Aglarond is the only place where they have a majority.

A: As a race the half elf have elven the grace without without elven the aloofness and also human energy without the human boorishness. Actually, it is not the official definition to the half elf, but as per my personal experience i mentioned this as an answer to “what is half elf in d&d?”.

Q: What color are half elves?

A: These half-elves are the paler, fairer and also the smoother-skinned than all of their human parents, even though their actual skin tone, hair color, and also the other details will vary just like the human features do. The half-elves eyes are green.

Q: How tall are half elves in D&D?