D&D 5e Humans are spread widely in Toril and they can be found in most regions easily. They are disagreeable and fierce and lead other races to view them with contempt. They are famous for their ambition and diversity. Humans, although lack many specializations that they can excel in many areas. They are the achievers, innovators, and pioneers of the worlds. Their capacity to expand and endure makes them the dominant race. 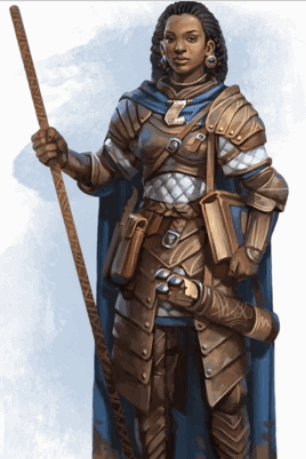 5e Humans are the youngest of the common races. They are short-lived in comparison to elves, dragons, and dwarves. Maybe because of their shorter lives they try to achieve as much as they can in the years they have. The other reason may be that they feel they have something to prove to other races. And, because of this, they built their huge empires on the basis of conquest as well as trade.

Just like humans mix with each other, they also mingle with the members of other races. Humans might not be close to many but the get along with almost everyone. They serve as diplomats, ambassadors, merchants, magistrates, and functionaries of all kinds. We just published orc 5e race article have a look at that article.

The origin of humanity is unknown. But they are an ancient race as because they originated before written records exist and also considered one of the creator races, however, they aren’t known to have actually created any species. There is also a confusing thing, and that is, while humans truly are native to Toril, they also have been found on other worlds as well. Mulani is such an example of this.

Regardless of their precise origins, 5e humans are undeniably successful. Human is one of the most dominant races of Toril. Maybe because of their strength they are eternally fractured and divided race. It is believed that this is in part because human race, unlike most other races, didn’t emerge as a whole but rather in many places at once and Here we just written detailed guide about half orc appearance and other things of this race.

Humans have so much variety than the other races. Despite that, they have no typical names. Some d&d 5e human children are given a name from other languages by their parents. Such examples are Elvish or Dwarvish. Most parents give names that are linked to their religion’s culture or to the naming tradition of their ancestors.

Physical characteristic and material culture of humans can change wildly from region to region. In the Forgotten Realms, the architecture, clothing, music, literature, and cuisine are different in northwestern lands of the Silver Marches than in distant Turmish to the east. Physical characteristics of human vary according to the ancient migrations of the earliest humans.

In the Forgotten Realms, nine 5e human ethnic groups are widely recognized, although more than a dozen others are found in more local areas of Faerûn. No matter which worlds your human is in, these groups and the typical names of their members can be used as inspiration. Have a look at this half elf 5e and stats etc..

Calishites have dusky brown skin, eye, and hair. They are shorter and slighter than other humans. Normally they are found in southwest Faerûn.

Chondathans have brown hair that ranges from almost blond to almost back. They are slender and tawny-skinned folk. Most of them are tall and have green eyes. These traits are not universal. Around the Inner Sea, humans of Chondathan descent dominate the central lands of Faerûn.

Damaran are primarily found in the north-west of Faerûn. Their height and build are moderate. Skin hues range from tawny to fair. Their color of eyes varies widely but the brown is most common. Hair color is usually brown or black.

They are tall and their skin is fair. They have blue or steely grey eyes. Most of the Illuskans have raven-black hair and some also have red, blond or light brown hair.

Mulan are tall, slim and amber-skinned. They are dominant in the eastern and south-eastern shores of the Inner Sea. Their eyes are brown or hazel and hair ranges from black to dark brown but Mulan shave off all their hair where the Mulans are most prominent.

Rashemi are short, muscular and stout. They often found east of the Inner Sea and often intermingled with Mulan. Rashemi have dusky skin, thick black hair, and dark eyes.

Shou are yellowish-bronze in Hue. They are the most numerous and powerful group in Kara-tur that is far from east of Faerûn. They have dark eyes and black hair. Their surnames are generally presented before the given name.

Tethyrians are of medium height and build. They are widespread along the entire Sword Cost. They have dusky skin and the color of hair and eye varies widely but blue eyes and brown hair are the most common.

Turami are generally muscular and tall. They are the native of the southern shore of the Inner Sea. Turami have dark mahogany skin, dark eyes, and curly black hair.

Your human character has these traits

Ability score of your human character is increased by 1

They tend toward no particular alignment. Among them, the best and the worst can be found

Your base walking speed is thirty feet

They widely vary in height and build. They are barely 5 to 6 feet tall. Regardless of your position in that range your size is medium.

You can write, read and speak Common and one extra language of your choice. Humans learn the languages of other people they deal with.

If the optional feat rules from the Player’s Handbook are used in your campaign, then your Dungeon Master might allow these variant traits, which replace the human’s Ability Score Increase trait.

Feat – You gain 1 feat of your choice

Skills – You gain Proficiency in 1 skill of your choice.

Humans are more physically diverse compared to the other races. Humans are 5 feet to little over 6 feet tall and weigh between 125 pounds to 250 pounds. Their skin tones range from nearly black to very pale. Most of the humans have a dash of non-human blood which reveals the hints of orc, elf and other lineages. They reach adulthood in their late teens and rarely live for 100 years. Here you can know more about halfling d&d and other things about this race.

Variety in All Things

Humans are the most ambitious and adaptable race among the other races. Their morals, tastes, and customs in vary widely many different lands. Wherever they stay they build cities that last for years. They fully live in the present which makes them well suited for the adventuring life. Humans are adaptable opportunists doesn’t matter whether they are individual or group. They always stay aware to change social and political dynamics.

Planetouched subspecies of human were found as there are no natural human sub-races. These include tieflings, aasimars, and genasi. Also, between humans in different regions, there is ethnic diversity. Listed below are the largest ethnic groups that found in Faerûn

Below are the ethnic groups which are small in number

Humans 5e are kin to many races. Human bred outside their race many times and half-human races like Half-orcs and half-elves are the results of that.

The physical features of the humans are different as the world’s climes. Their Cheekbones may be broad or high, lips full or thin and noses flat or aquiline, eyes range widely in hue. Humans’ hair color, bone structure, eye color characteristics differ immensely from one locale to another. They are specified by their bodily decoration, not only in the jewelry or clothing worn but also in elaborate hairstyles, tattooing, scarification, and piercing.

Their drive and numbers over and over again spur them into interaction with other races during colonization. This tendency, in many cases, leads to war and violence. Sometimes humans might look upon elves as flighty flops, dwarves as miserly drunkards, gnomes as twisted maniacs, halflings as craven thieves and half-elves and half-orcs as embarrassments in arrogance. Humans may remain ignorant of the culture and language of others because of their engagement in own affairs.

The human race is the most diverse race of all other common races. Some humans build sprawling cities that cover miles and other assemble into vast barbaric hordes. Most of them are neutral but they generally tend to congregate in civilizations and nations with a specific alignment. They also have the widest range of religions and gods.

Humans found sacred orders and institutions for the purposes where a single dwarf 5e or elf might take on the responsibility of guarding a special place. Humans dream of immortality. And, they get this by ensuring that they will be remembered when they are gone. Some humans can be xenophobic. Their societies are inclusive. They welcome a large number of non-humans to their land as compared to the proportion of human who lives in non-human lands.

Those humans who seek adventure are the most ambitious and daring members of a daring and ambitious race. By amassing wealth, power and fame they seek to earn glory in the eyes of their fellows.

Q: What is a human variant 5e?

A: +1 to 2 ability scores any of your choice and also one extra skill proficiency, one feat. Actually a variant human is the only character raw those who can take a feat at level 1.

Q: How long do humans live in dnd?

Q: How tall are humans d&d?

A: Basically, the humans vary widely in the height and also build, from barely 5 feet to well over 6 feet tall.